Imagination, working at full strength, can shake us out of our fatal, adoring self-absorption, and make us look up and see – with terror or with relief – that the world does not in fact belong to us at all. ~~ Ursula K. Le Guin

One of the most irritating questions I hear at a book discussion is: “Why would anyone do that?” My immediate response is always: “Because if they didn’t, there’d be no story to tell!” At the core of literature, of any kind of story, is people making decisions. You will either agree or disagree with their choices, but if characters always chose the most sensible options, if there were no consequences to their actions, there would be no story. It’s as simple as that.

You may have also noticed that stories are rarely about people on their best days. Who wants to read about that? Only on bad or difficult days do interesting things happen, things worth reading about. To paraphrase Tolstoy: All good days are alike; each bad day is bad in its own way.

To take full advantage of a fictional narrative, we’re required to suspend our disbelief and squelch the need to judge; to pat ourselves on the back and state that we’d never do thus and such. Because the truth is, we don’t know what we’d do unless we’re confronted with that same set of circumstances. Our choices might be better, or they might be much, much worse.

Reading is about learning the limits of what we think we know – about life and about ourselves. This is why questioning a character’s choices never fails to set my teeth on edge. It misses the point of storytelling: which is to deliver the news that nothing in life is ever as clear-cut as we imagine it, or want it, to be. 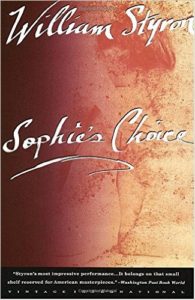 I’d only seen the movie, and that was years ago, so I decided it was time to order the book and read it. But I was unprepared for the dark journey this haunting and heartbreaking tale would take me on. Styron’s narrative requires patience – the book is long and detailed, with numerous lengthy digressions which serve the story in the long run, but which in the moment can seem frustratingly extraneous. Patience, however, is rewarded. Styron creates a tight, multi-threaded web that first catches, then pulls the reader into Sophie’s personal hell. Masterfully told, alternately expansive and painfully focused, the story grabbed me and would not let me go.

If you’ve seen the movie, you know the event that is the source of the title. Yet this story is about much more than one moment in Sophie’s life. It’s about the many choices she makes throughout her life, including choices forced on her by the larger world, one of unspeakable evil. Even knowing the basic plot and the ending, I was struck by Styron’s brilliant use of the parallel stories of Nathan, Sophie, and Stingo, the narrator – how they intersect and ultimately diverge, spiraling down into madness and destruction. Styron’s masterful use of setting and foreshadowing, his deep research (you can sense the pressure he feels to get his facts right), and his genius with language make this book a literary gem.

This is not a book you can speed through. If you choose to enter this fresh hell, it will hold you hostage. Styron forces the reader to look: at the most heinous event of the 20th century; and at its lasting effects on one small set of characters – one who lived it, one who feared it, and one who is only now beginning to understand his blindness to and collusion with it. Given the right circumstances, any of us could be Sophie, or Nathan, or Stingo. Styron is telling us to beware: we ignore him at our peril.

My year of reading enriched my life so much that I’m planning a repeat performance. In fact, I’ve already started, and am on pace to read another fifty books in 2017. Because for some strange reason, my to-read pile is just as tall now as it was at the beginning of 2016, but with different books. How did that happen?

Well friends, that’s all she wrote. Thanks for taking this journey with me. And happy reading!