Skip to content Skip to main menu
Home › Uncategorized › My Favorite Reads of 2016, the home stretch…

You must read dreadful dumb books and glorious books, and let them wrestle in beautiful fights inside your head, vulgar one moment, brilliant the next. You must lurk in libraries and climb the stacks like ladders to sniff books like perfumes and wear books like hats upon your crazy heads…Which finally means, may you be in love every day for the next 20,000 days. And out of that love, remake a world. ~~ Ray Bradbury

Since the late, great Mr. Bradbury said it better than I ever could, let’s get on with #6 of my favorite reads from 2016: 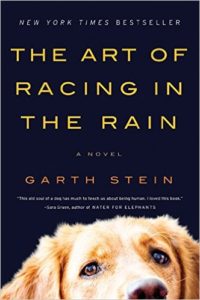 I ordered this book from Powell’s when I saw it was in my book group’s line-up; also, the title had been on my radar for some time. When I started it, I honestly thought it was about running. I knew the story took place in the Pacific Northwest, where I also knew, because I’d lived there for many years, that running is a popular sport. If you live in the PNW and don’t run in the rain, you’ll never run at all. Imagine my surprise when I learned the book is about race car driving. All right, I thought, here’s an opportunity to learn something new, like I did with rowing when I read The Boys in the Boat. Bring it on.

I also knew that the narrator is a dog. Some readers will roll their eyes at this. But for fifteen years I wrote our holiday letter (who does that anymore?) from the perspective of our imperious cat. It was such a hit that people started sending their holiday letters directly to her, completely bypassing us. So, sure, I could accept the premise of a dog as narrator.

The dog in question is Enzo (which in Italian means “ruler of the household” – a nice touch), and he speaks to us in clear and simple language. My only complaint is that occasionally he’s a tad erudite. Yes, he’s a Labrador retriever, one of the smartest breeds on the planet (and another wise choice on the part of the author), perhaps even smarter than most people. But we already have a talking dog, which requires more than enough suspension of disbelief. When Enzo speaks like a Harvard graduate, it seems to me that Stein is stretching the scenario a bit too far. It’s a small quibble, however, and did nothing to diminish my enjoyment of the book.

Enzo’s goal is to be a human in his next life, and he tries valiantly to overcome his canine instincts to earn this promotion. In the time-honored method of exploring humanity through the eyes and actions of a non-human (think Mr. Spock or Data from “Star Trek”), Enzo becomes the most human character in the book. The storytelling is excellent, with life-and-death stakes, and with enough happy moments to release tension and to devastate the reader when reverses and set-backs occur. There were moments that made my blood boil, and moments that made me laugh out loud.

But what I connected with most was the story’s inspirational quality. Through the medium of car racing, Enzo learns important lessons about life: it’s his path to humanity. The book is packed with such moments. Enzo’s understanding, for example, of the notion that: “No race has ever been won in the first corner…but plenty of races have been lost there…to finish first, first you must finish,” is excellent advice on perseverance whether you’re racing, writing, or trying to lead an authentic, human life.

Next time, we’ll wrap things up. See you then!