The central function of imaginative literature is to make you realize that other people act on moral convictions different from your own. ~~ William Empson, literary critic and poet

The more I began to read, the more realized that there were worlds out there – worlds of thought and of action – that I’d never I imagined before. I’d been taught to think inside a tidy little box, to learn and to parrot back the right answers, to never question received conventions. But I did have questions and quandaries, and nowhere to explore or express them. Music opened the door and took me over the threshold, but reading kept me in the room.

I hungered for huge stories; stories that made me think and feel. I sought books that got under my skin as I read them, and that stayed with me afterward. I didn’t care if the books were old or recently published. I still don’t.

My third favorite read of 2016 fills the bill, and more: 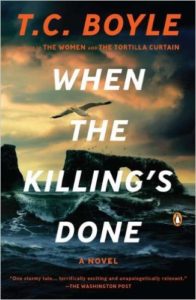 I can always count on T.C. Boyle to deliver a fascinating tale, so I didn’t hesitate when I saw this book on a discount table; I grabbed it and I’m glad I did. Boyle possesses one of the most incisive literary minds of our time, and this is my favorite novel of his to date. I loved his interesting (and occasionally infuriating) characters, masterful storytelling, phenomenal writing, and wicked sense of humor, all of which combine for a thoroughly engrossing narrative. A bonus was learning about – experiencing, actually – an area of the California coast and Santa Barbara Islands that I knew little about, even though I grew up in California. Boyle’s engaging writing made me feel I was there.

One small criticism is that the multiple, parallel timelines occasionally made for confusing reading. But perhaps there’s method in Boyle’s madness. His characters inhabit a landscape of moral conundrums, sailing in murky waters, where the answers – and even the questions – are rarely in black and white. This serves to make the reader see, even if the characters don’t, that the world’s problems aren’t as easily parsed as the media, social media in particular, would have us believe. By pitting park rangers against environmentalists Boyle creates a Mom-versus-Apple Pie scenario rife with conflict and misunderstanding. If everybody’s right, then who’s wrong? Who is the real villain? You’ll have to read the book and draw your own conclusions.